The Japanese vendor of CPU coolers, Scythe, has enriched its collection with the Choten cooling unit. The novelty costs approximately 30–35 euro, however, it doesn’t look like a low-end sample. This product has a top-flow construction that makes air go down in the direction of the mother card, thus providing efficient chilling of the processor and important components, placed around the CPU socket. 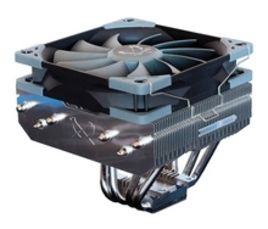 This wonderful cooler possesses a horizontally located heatsink, four 6 mm heat pipes and 120 mm Kaze Flex 120 PWM fan. The propeller rotates at the 300–1,200 rpm speed, while producing the airflow of up to 87 m3/h at the 4–24.9 dBA noise level.

Dimensions of the Scythe specialty are the following: 130 х 120 х 130 mm. Its weight reaches 550 g. The manufacturer does not specify, which TDP rate this device is intended for, but we suppose everything is OK with compatibility. The Scythe Choten cooler isn’t able to operate with AMD TR4 and Intel LGA 2066, but it can be easily used with all other modern consumer-oriented platforms.
Devid.info © 2020
Contact form |
Language
| News | Latest Drivers | Terms of use | Privacy policy | Cookie policy
The Devid.info™ agent utility uses data collection technology to conveniently update multiple PC drivers. Drivers are the property and the responsibility of their respective manufacturers, and may also be available for free directly from manufacturers' websites. Devid.info is not responsible in any way for the performance of or issues caused by any third-party drivers.Drivers may also be available for free directly from manufacturers' websites. Microsoft and Windows are either registered trademarks or trademarks of Microsoft Corporation in the United States and/or other countries. Any other third-party products, brands or trademarks listed above are the sole property of their respective owner. No affiliation or endorsement is intended or implied.