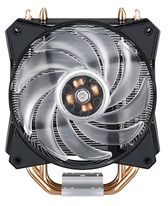 The cooler design includes four heat pipes with the direct contact to the processor cover. Their diameter equals 6 mm. Besides, the cooler construction features an aluminium heatsink and a 120 mm fan, which is regulated by the PWM function. The rotary velocity of the fan is between 650 and 2000 rpm. The noise level does not overcome 30 dBA. The average time to failure stated is 160,000 hours.

Possessing the 84 × 129 × 158.5 mm dimensions and the 420 g weight, the MasterAir MA410P cooler costs around 40 EUR.
Devid.info © 2020
Contact form |
Language
| News | Latest Drivers | Terms of use | Privacy policy | Cookie policy
The Devid.info™ agent utility uses data collection technology to conveniently update multiple PC drivers. Drivers are the property and the responsibility of their respective manufacturers, and may also be available for free directly from manufacturers' websites. Devid.info is not responsible in any way for the performance of or issues caused by any third-party drivers.Drivers may also be available for free directly from manufacturers' websites. Microsoft and Windows are either registered trademarks or trademarks of Microsoft Corporation in the United States and/or other countries. Any other third-party products, brands or trademarks listed above are the sole property of their respective owner. No affiliation or endorsement is intended or implied.