Antec has expanded the range of computer cases in the Mid-Tower format with the P8 model, in which it is possible to install ATX, Micro-ATX and Mini-ITX motherboards. The main feature of the novelty can become the side wall which is completely made of 4 mm thick tempered glass. The size of the case is 470x443x210 mm. 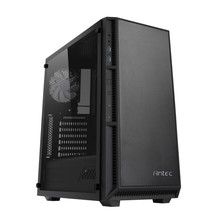 Antec is packed the P8 in a brown cardboard box with a picture of the device in front. The rear transmits additional information along with a diagram of the structural features of the case. Both side panels are covered with numerous tables of specifications in different languages.

In Antec P8, you will find a basic I / O set consisting of a regular pair of audio connectors, two USB 3.0 ports and traditional power and reset buttons along with the active hard drive LED. On the front panel Antec also  a fairly large company logo is placed, which starts glowing when the system is turned on. 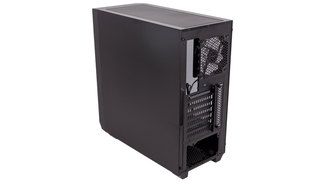 Antec chose a high quality tempered glass for the main side panel, which is held in place by four large screws. The opposite side is completely solid, made of more traditional steel.

In the back, at the very bottom, there is a fairly standard BP compartment with one set of mounting holes to make sure the installation is correct. Above there are seven expansion slots, each of which is protected by a simple partition, with the exception of the uppermost slot. It would be nice to use reusable inserts that provide much more flexibility in replacing components with time. At the top there is a white 120 mm fan with an installed LED, pumping hot air from the rear of the case.

The upper part has a large metal mesh filter, fixed in place by magnetic strips. Below it you will find a well thought-out marking of holes for attaching to the P8 ceiling two 140 mm fans or three 120 mm or up to 240 mm of the radiator.

On the underside of the chassis there is another ventilation compartment, but it covered with a similar metal mesh filter for the power unit. You can also see where the hard drive is installed. It can move left or right, allowing you to set various cooling settings in the front of the chassis without sacrificing the HDD frame.

In front, under the casing, there is a mobile 3.5" cage with two pallets for disks, that can be used instead of 3.5" 2.5" variants. The entire front is a solid ventilation hole with two pre-installed simple fans with built-in LED backlighting. In front there is a large detachable dust filter, you also have the opportunity to install a third 120mm fan or to place a 360 mm radiator.
The installation of the power supply is quite simple. The user is to insert it into the housing under the casing and to secure with
traditional screws. There is enough space for most copies. One should not worry about whether he or she can install a device that can provide enough energy for powerful components.

Thanks to the smooth design, none of the plastic elements looks cheap. The power LED lights up blue, and the Antec logo is lit with a white light. Given this, some may argue that there is actually no need for an LED for power. However, in this way, those who do not want to have a logo as a secondary light source can simply turn it off. 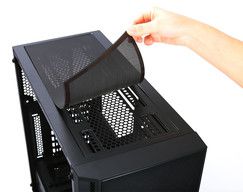 
- Comes with non-retail quality fans
- I / O is a little bit simple
- Disposable covers for expansion slots
- Internal accessories used by other brands
Devid.info © 2020
Contact form |
Language
| News | Latest Drivers | Terms of use | Privacy policy | Cookie policy
The Devid.info™ agent utility uses data collection technology to conveniently update multiple PC drivers. Drivers are the property and the responsibility of their respective manufacturers, and may also be available for free directly from manufacturers' websites. Devid.info is not responsible in any way for the performance of or issues caused by any third-party drivers.Drivers may also be available for free directly from manufacturers' websites. Microsoft and Windows are either registered trademarks or trademarks of Microsoft Corporation in the United States and/or other countries. Any other third-party products, brands or trademarks listed above are the sole property of their respective owner. No affiliation or endorsement is intended or implied.