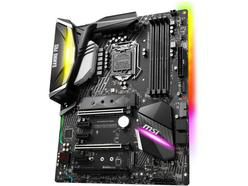 For the work of  Coffee Lake processors you need new motherboards. Despite the accelerated launch of chips with an increased number of cores, the motherboard manufacturers managed to prepare for the start of 8 Core processors sales, which is better than Intel. Today we have a review of the model MSI Z370 GAMING PRO CARBON AC.

MSI has already managed to release a lot of motherboards based on the Intel Z370. One of the first models is the given motherboard. In connection with the release of six-core processors, one of the main issues was the temperature regime of VRM and the willingness of cards to overclock. However, the key feature of this model is the extended work with backlighting. There is support not just for RGB LED tapes (four-contact areas for connection are used), but also for more intelligent ones with addressing (there are already three contacts for them). There are two nests for each type. 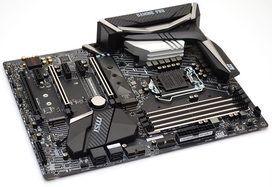 The device comes in a box of usual sizes. Key features are highlighted on the front side- the presence of RGB backlight (set of Mystic Light settings) and belonging to the average ranked series of gaming boards - Performance Gaming.

The device box is framed in dark colours. Behind there is a photo of the device and a small table with its characteristics, a schematic image of the rear panel is also available. The remaining space is reserved for describing the advantages of this product.

The board includes a manual, a software CD, a quick installation guide, a set of stickers, two SATA interface cables, a set of extension adapters for connecting LED strips, a SLI HB bridge and a plug to the back of the case.

The MSI Z370 GAMING PRO CARBON AC is based on the Intel Z370 chipset and is ready to work with any processor of the Coffee Lake family. Remember that the new motherboards are not compatible with previous generations of Intel processors (Skylake / Kaby Lake), despite the usage of the LGA1151 connector.

The board has classic dimensions for ATX-models (305 × 243 mm) and is made in deep black color.

The board is designed exclusively for assembling PCs, to facilitate operation in the open stand mode, there is absolutely nothing (there are no buttons, switches, auxiliary indicators, the same POST code controller is also not provided). Nine holes are prepared for fixing like most ATX products.

The appearance of the advanced menu of Click BIOS 5 is the same as in the previous generation of products. Settings - the first chapter of the menu. here are the settings of all the components of the system, not related to the speed of the PC.

The list of proprietary utilities is expanded due to the appearance of the APP Manager shell, and now the backlighting is done with the assistance of Mystic Light, and before (in the past generation of products) it was carried out through one of the Gaming APP modules.

The power subsystem has a 10-phase circuit (6 + 2 + 2) and is controlled by the uP9508Q controller. A pair of additional medium-sized radiators is provided to cool the assemblies. At first glance it may seem that the coolers are interconnected, but this illusion is created by a plastic lining. One 8-pin connector is provided at the top edge of the board to supply additional power.

Four slots for memory modules allow you to use up to 64 GB of memory. For the board, support for modules up to DDR4-4000 is claimed. There are such sets in the list of validated ones, and the manufacturer declares the possibility of not only two, but also four memory DDR4-4000 memory slots.

In addition, near each memory slot, red signal LEDs are installed, which are highlighted when the module is installed in the co
nnector. 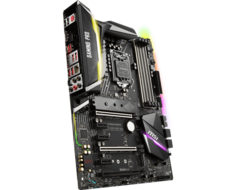 As it is easy to see, slots for DIMM are sheathed with metal. This technique is used for mechanical protection o
f connectors and additional protection against interference. Although, there is more marketing than physics in both statements.

DDR4 Boost technology requires an isolated area for the signal conductors of memory modules. According to the developers, it is possible to reduce the spurious interference improving the stability of the high-speed kits.

The board provides six expansion slots - three PCI-E x16 and the same amount of PCI-E x1. The MSI Z370 GAMING PRO CARBON AC allows you to split the processor bus lines in equal proportions, so the slot configurations can take the form x16 / 0 / x4 or x8 / x8 / x4. As you can see, the third full-slot slot always works in x4 mode and is serviced by the chipset.

The reviewed motherboard left a good impression. In the regular mode of operation, it will not give the system any additional advantage, because it adheres to the Turbo Boost scheme in the form it was designed by Intel specialists. There is a senior audio codec Realtek and a set of various network adapters. To gain sympathy, it can extended support for illumination systems. Te work with coolers is also well implemented, there is a choice of controlling method for six independent devices.

Enthusiasts may not have enough auxiliary elements (control or indication systems). In the arsenal of the device there are only two temperature indicators (PCH and the board itself) in addition to the processor data.
Devid.info © 2020
Contact form |
Language
| News | Latest Drivers | Terms of use | Privacy policy | Cookie policy
The Devid.info™ agent utility uses data collection technology to conveniently update multiple PC drivers. Drivers are the property and the responsibility of their respective manufacturers, and may also be available for free directly from manufacturers' websites. Devid.info is not responsible in any way for the performance of or issues caused by any third-party drivers.Drivers may also be available for free directly from manufacturers' websites. Microsoft and Windows are either registered trademarks or trademarks of Microsoft Corporation in the United States and/or other countries. Any other third-party products, brands or trademarks listed above are the sole property of their respective owner. No affiliation or endorsement is intended or implied.