Lately the German Cougar vendor has released the Panzer Evo chassis, the outer appearance of which resembles the Panzer-G model. It has four panels out of tempered glass, too. However, the novelty belongs to the Full-Tower form factor. 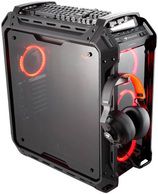 The dimensions of Cougar Panzer Evo are 556(L) x 266(W) x 612(H) mm. Inside one may see mounting seats for eight expansion cards, four 2.5” and two 3.5” drives, an ATX compatible power supply unit and a CPU cooler 170 mm high. The length of graphics adapters may reach 390 mm. Cougar produced its product compatible with motherboards of up to the Extended ATX format.

The Panzer Evo framework by Cougar costs approximately €160.
Devid.info © 2021
Contact form |
Language
| News | Latest Drivers | Terms of use | Privacy policy | Cookie policy |
The Devid.info™ agent utility uses data collection technology to conveniently update multiple PC drivers. Drivers are the property and the responsibility of their respective manufacturers, and may also be available for free directly from manufacturers' websites. Devid.info is not responsible in any way for the performance of or issues caused by any third-party drivers.Drivers may also be available for free directly from manufacturers' websites. Microsoft and Windows are either registered trademarks or trademarks of Microsoft Corporation in the United States and/or other countries. Any other third-party products, brands or trademarks listed above are the sole property of their respective owner. No affiliation or endorsement is intended or implied.