Introduction
In addition to this year's Intel Optane DC P4800X SSD for data centers and caching memory, Optane Memory Intel is launching a small series of SSDs for high-performance Optane 900P workstations. New SSDs based on 3D XPoint technology are intended for enthusiasts and professionals engaged in photo and video processing, game development, etc.
The Intel Optane SSD 900P is extremely fast thanks to the new 3D XPoint memory, but it's also expensive, as this latest technology is in high demand now. For more than a decade, Intel and Micron have jointly created 3D XPoint memory as a part of a closed secret project in1966. Developers still do not disclose the details of this technology, although third-party companies confirm the information that this is one of the forms of memory based on the phase transition (Phase-change memory, PCM). 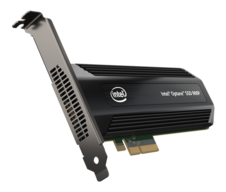 Performance
To speak about the performance, the new high-speed memory is designed to fill a niche between operational and permanent memory, so it covers both sections. 3D XPoint is more expensive than NAND, but it is faster and more durable. 3D XPoint is slower than DRAM, but it is cheaper and has a higher density. The main advantage? Unlike DRAM, it saves data when the power is turned off, which makes it a suitable replacement for NAND.

The question is how much Intel cut the consumer version in order to reduce its price and at the same time not allow the administrators of data centers to save money on it.

Intel found a way to prevent the purchase of these drives by corporate customers: the desktop Optane SSD 900P has a three times lower claimed resource than the industrial model, and it lacks some corporate functions, such as SMBus. Nevertheless, in terms of speed characteristics Optane SSD 900P coincides or even ahead of DC P4800X, so we are to expect truly explosive power.

Intel brings to the market Optane SSD drives in two capacities: 280 and 480 GB. The drive comes in two completely predictable form factors: PCI Express expansion card and 2.5-inch U.2 drive with SFF-8639 connector. Initially, only these four models will be available, and 480-gigabyte U.2 will appear before the end of the year. U.2 drives have two model numbers. One of them will be supplied with a standard U.2 cable, and the other will have an adapter with M.2 to U.2.

Intel will surely release corporate models of a higher capacity by the end of the year, and in 2018 even more ambitious modifications should appear. The customers expect that the volume of desktop versions will also grow, but Intel did not mention any specific plans for this.

Closer Look
Optane 900P provides a speed of up to 2500 MB/s for sequential reading, which is 100 MB/h higher than the corporate DC P4800X. The speed of sequential recording is up to 2000 MB/s, but you will have to try to achieve it. But when we compare Optane SSD 900P with NAND SSD, here the advantage of 3D XPoint is undeniable: desktop drives achieve a read/write speed of 550000/500000 I/O operations per second, which is much faster than any consumer SSD.

The memory of 3D Xpoint uses bit-wise addressing, therefore, unlike SSD based on NAND-memory in which the recording is conducted by large blocks, the Optane 900P can break 4K blocks into small pieces and scatter them across many crystals, and this fact improves the performance greatly. Each 3D Xpoint crystal has 64 separate regions, capable of simultaneously responding to commands, while the usual NAND has only four of them. This should provide explosive performance growth for desktop PCs.

If to compare with NAND, 3D XPoint is a memory with a "in-place" recording. It means that before writing new data to the SSD controller, the user does not need to erase the existing ones. By eliminating the unnecessary write cycle, durability increases and productivity gets higher, moreover, garbage does not accumulate.

On the case of Intel Optane SSD 900P there is nothing particularly interesting due to the two metal casings closing it, which act as radiators and at the same time protect the tender components that are soldered on the board.

Under the radiator is seven-channel NVMe-controller Intel, specially designed for these drives. This controller is able to address up to four chips per channel (in total - 28). 900P with a capacity of 280 GB is equipped with 21 16-gigabyte chips installed on both sides of the PCB - this gives us a "raw" capacity of 336 GB.

In SSD based on NAND-memory there is an additional area that is not accessible to the user. Its part is assigned to the ECC and RAID service level information of the device, which increases the reliability of the drive. The rest is used by Over-Provisioning technology, which increases productivity and durability. 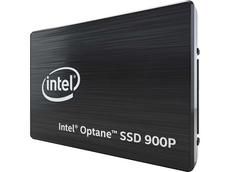 Conclusion
"Based on 10 years of research and development, 3D XPoint technology was created on the ground  to meet the demand in energy-independent, high-speed, durable and high-capacity data storage solutions at an affordable price. The technology uses a new class of non-volatile memory, which significantly reduces latency, allowing you to store more data closer to the processor", said Intel.

Selling of Intel Optane SSD 900P drives have already started. The price of devices with a capacity of 280 GB is about 390 US dollars, and the 480 GB model will cost $600. Manufacturer's warranty is five years.