The Toshiba Company has announced its latest external solid-state drives line, called Toshiba XS700. At the moment this series includes only one model of the 240 GB capacity. The device is produced in a regular 2.5-inch form factor; the framework height is extended, though. Dimensions are 95 х 75 х 11 mm, weight is 90 g. 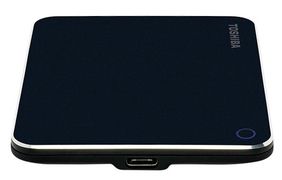 Toshiba developers applied the combination of the 3D BiCS TLC NAND microchip and the Phison S11 controller. The specialty is equipped with a front-end USB 3.1 Gen 2 Type-C port, and commutation is ensured by the VIA VL715 chip, which means USB-attached SCSI (UASP) protocol is also supported. Owing to such specifications the transfer read speed in ATTO Disk Benchmark reaches 530 MBps, while the transfer write speed – 480 MBps.

Regretfully, we have no news about Toshiba XS700 SSD’s cost now. But we are armed with information that the novelty will be retailed, possessing a 3-year warranty and a 450 mm (17.72 inches) interface cable. Besides, it will be possible to download a handy SSD Utility app for monitoring and maintaining the disk.
Devid.info © 2022
Contact form |
Language
| News | Latest Drivers | Terms of use | Privacy policy | Cookie policy |
The Devid.info™ agent utility uses data collection technology to conveniently update multiple PC drivers. Drivers are the property and the responsibility of their respective manufacturers, and may also be available for free directly from manufacturers' websites. Devid.info is not responsible in any way for the performance of or issues caused by any third-party drivers.Drivers may also be available for free directly from manufacturers' websites. Microsoft and Windows are either registered trademarks or trademarks of Microsoft Corporation in the United States and/or other countries. Any other third-party products, brands or trademarks listed above are the sole property of their respective owner. No affiliation or endorsement is intended or implied.