Introduction
In order to join the products of the ASUS Republic of Games series in the framework of Skylake processors, it's just enough to pay attention to the motherboard ASUS Maximus VIII Hero. This model in the line of ASUS motherboards for Skylake processors stands out not only for its original appearance, but also for its outstanding features. Based on the set of Intel Z170 logic system, this motherboard supports the latest technology, and it can also provide the user with extensive overclocking abilities. 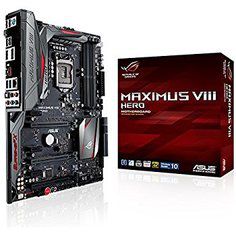 Packaging
As it fits to the boards of the Republic of Games series, the packaging of the ASUS Maximus VIII Hero is made in the classic dark and red colors. This style and design of products of this series from the company ASUS is present for a long time, thanks to which this product is recognizable among many other devices. The front part of the box contains the name of the model of the motherboard, as well as a sticker with information about the 15-day premium account for the game World of Warships. Pictograms at the bottom of the box get the names of the supported technologies and standards, among which a special emphasis is placed on compatibility with Windows 10.

Being a premium product, the ASUS Maximus VIII Hero is packed in a box with a double lid and a transparent inner wall, thanks to which it is possible to view the card through a plastic blister without opening the entire package. Such a flip wall for ASUS products is no longer a wonder, and is inherent, as a rule, only top models.

The folding cardboard cover on the inside is also an informational useful component, as it is here that the manufacturer tells about the company's technologies which are present in the ASUS Maximus VIII Hero.

Design
In the board design of ASUS Maximus VIII Hero, most people will see the features of the game device. The combination of thin dark red lines and black and gray colors creates quite a brutal mood.
The board ASUS Maximus VIII Hero is made in the ATX form factor, the physical dimensions of the novelty are 305x244 mm. Mounted in the case of the system unit board with the help of nine holes. 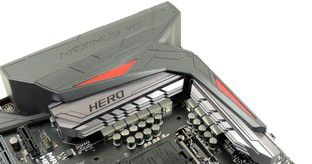 The main detail to which the manufacturer has focused all the attention, giving such bizarre forms to the radiators and the casing is the processor socket. ASUS Maximus VIII Hero supports any 14-nm processors of the Skylake family with LGA1151 connector, including models with an unlocked multiplier. For high-quality power the latter on the ASUS Maximus VIII Hero is provided with a 10-phase power harness with solid-state capacitors and digital control.

RAM on the ASUS Maximus VIII Hero can be installed in up to 4 modules, each of which can be up to 16 GB. Supports DDR4 memory modules with an operating frequency from 2133 to 3800 MHz. Next to the memory slots there is a main 24-pin power connector, and a 19-pin USB3.0 connector.

From the very corner of ASUS Maximus VIII Hero you can see a two-symbol POST indicator, according to which it is easy to guess the reasons for the system's inappropriate work.


Most of the audio components on the motherboard ASUS Maximus VIII Hero is covered with a plastic casing, on which the inscription SupremeFX flaunts.

The main merit in supporting the most up-to-date standards and technologies remains behind the set of Intel Z170 system logic. The chipset itself, as expected, is closed by a small aluminum radiator with the logo of the Republic of Games series.

There are six connectors with a 4-pin connector: three from the top of the board, and three more in the remaining parts of the overall board design. 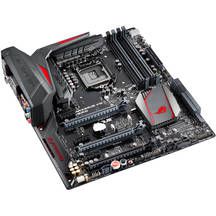 The motherboard BIOS settings of the ASUS Maximus VIII Hero are as welcoming as possible for beginners and advanced users alike. The basis of the firmware is the EZ Mode, which cont
ains the most basic information about the system, including the main indicators of temperature, frequency, voltage and fan speed. Here you can choose the boot device, set the date and time, and activate the XMP profiles.

In addition, in the EZ Mode header menu, the fan operation can be adjusted using the QFan Control tool. It is possible to control each individual fan in five separate control points.

Full access to the settings is provided by Advanced Mode. Here, the user has the access to all possible settings of the firmware. In particular, the Main tab displays general information about the system, and it is also possible to select the language of the firmware.
Devid.info © 2021
Contact form |
Language
| News | Latest Drivers | Terms of use | Privacy policy | Cookie policy |
The Devid.info™ agent utility uses data collection technology to conveniently update multiple PC drivers. Drivers are the property and the responsibility of their respective manufacturers, and may also be available for free directly from manufacturers' websites. Devid.info is not responsible in any way for the performance of or issues caused by any third-party drivers.Drivers may also be available for free directly from manufacturers' websites. Microsoft and Windows are either registered trademarks or trademarks of Microsoft Corporation in the United States and/or other countries. Any other third-party products, brands or trademarks listed above are the sole property of their respective owner. No affiliation or endorsement is intended or implied.