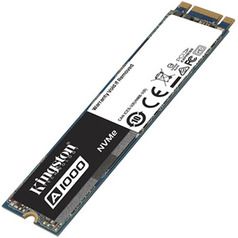 Conclusion
Kingston A1000 480 GB – is a bright representative of the emerging segment of budget drives M.2 PCI-E. By the standards of high-speed and high-priced M.2 PCI-E A1000 performance is not a record, but in comparison with the best SSD with SATA interface performance of new models of Kingston look very dignified. Separately, it should be noted that the Kingston A1000 has no problems with overheating of the controller even under heavy load, and therefore does an excellent job without additional cooling. In general, the basic models of M.2 PCI-E devices are very promising. Such devices facilitate the transition to fast drives, finally allowing you to get rid of the legacy and limitations of SATA. However, manufacturers here should find a balance between price, volume and productivity. It is important that such devices were attractive to the potential customer, that is worth much cheaper than top solutions M.2 PCI-E and are competitive in price with SATA-drives, significantly ahead of the latest high-speed parameters.
Devid.info © 2023
Contact form |
Language
| News | Latest Drivers | Terms of use | Privacy policy | Cookie policy |
The Devid.info™ agent utility uses data collection technology to conveniently update multiple PC drivers. Drivers are the property and the responsibility of their respective manufacturers, and may also be available for free directly from manufacturers' websites. Devid.info is not responsible in any way for the performance of or issues caused by any third-party drivers.Drivers may also be available for free directly from manufacturers' websites. Microsoft and Windows are either registered trademarks or trademarks of Microsoft Corporation in the United States and/or other countries. Any other third-party products, brands or trademarks listed above are the sole property of their respective owner. No affiliation or endorsement is intended or implied.