Introduction
The IronWolf Pro series consists of six models that range from 2TB to 12TB. The Pro series is much more powerful - Seagate warranties the mainstream IronWolf for 180TB of data writes per year, while the IronWolf Pro is rated for 300TB. This series has longer warranty free access to Seagate’s Rescue Data Recovery Service during two years. In case of any breakdown a user can send the drive to Seagate and the company will fix it or change for a new one.

The novelty we are talking today is IronWolf Pro 12TB – one of the best Seagate’s drives. In the comparison with its younger brother IronWolf Pro 10TB, the given model showed a slightly higher level of performance, two terabytes of additional capacity and a bit higher power consumption.
Engineers of the company managed to gather the efficiency, large volume and reliability of data storage in one place. A surcharge of about 80 dollars for two additional terabytes is not surprising for a flagship model. 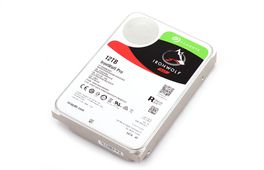 The model has the highest sequential performance if to compare with 8 and 10 TB devices.

Features
The IronWolf series is oriented and optimized for use in NAS environments. The chain of eight drives can be installed. The Pro version doubles the maximum number.

Inside the case is filled with helium. Due to this fact the consumption of energy decreases and the flatters can be closer to each other because of drag reduction. For data recording the PMR technology is used.
At the top covering there is a sticker with the most important characteristic data.

A built-in disk health monitoring feature that reads over 200 parameters. The state is assessed in dynamics. IronWolf Health Management means an integrated system for monitoring the state of the hard drive, IronWolf, which by capabilities far exceeds the widespread S.M.A.R.T. IronWolf Health-Management (IHM) tracks much more internal HDD parameters.

Seagate scored a capacity of 12 terabytes with the help of eight flatters. Compared to the previous 10-terabyte hard drive, Seagate was able to add one more flatter, and slightly increased the capacity of one flatter to 1.5 TB. The manufacturer indicates the power consumption in idle mode at the level of 5 W, while performing access operations it increases to 7.8 W. Compared to a 10-TB HDD, we get an increase of 0.4 watts in idle mode and 1.0 watts while loading. 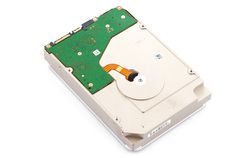 Like other IronWolf models, the hard drive is equipped with RV sensors. They can detect external vibrations that affect the hard disk. Such vibrations are always present in systems where several hard disks are installed in a confined space, they can affect the operation of the read/write heads.
Another feature of the 12-Tbyte IronWolf Pro is the attached Seagate Rescue Plan. As we explained above, Seagate Rescue is a professional data recovery service in the event of a mechanical defect or disk damage, for example, due to a natural disaster. Protection lasts two years after purchase, and it must be activated within 90 days after purchase. For IronWolf Pro, you can extend protection for five years.

As for the noise level, we can only give a qualitative estimate, since in practice the noise level of hard disks depends very much on their installation. The hard drive itself can work very quietly, but after installation, for example, in the NAS, everything can turn out differently, since the vibrations can be transmitted to the NAS case, the noise will greatly increase. The noise level of IronWolf Pro 12 TB corresponds to 10-TB models.