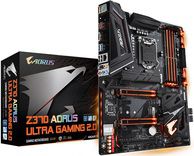 The specialty is different from its predecessor in the greatly enhanced processor socket power subsystem, featuring eleven phases (instead of seven) and ferrite-core chokes of a higher quality, which don’t squeak at high load. Besides, the supply set includes a heatsink for the M.2 drive.

Upon every other point the Gigabyte Aorus Z370 Ultra Gaming 2.0 card entirely coincides with the previous version. The PC-board shows three PCI Express 3.0 x16, three PCI-E 3.0 x1 slots, two M.2 interfaces and four slots for the DDR4 RAM memory. The Intel i219-V controller secures the Gigabit network interface operation. The audio subsystem of this novelty is based on the Realtek ALC1220 codec. One may also notice the RGB Fusion LED-backlighting, which is classical for Aorus products.

The estimated cost of Gigabyte Aorus Z370 Ultra Gaming in exterior stores is 170 USD.
Devid.info © 2020
Contact form |
Language
| News | Latest Drivers | Terms of use | Privacy policy | Cookie policy
The Devid.info™ agent utility uses data collection technology to conveniently update multiple PC drivers. Drivers are the property and the responsibility of their respective manufacturers, and may also be available for free directly from manufacturers' websites. Devid.info is not responsible in any way for the performance of or issues caused by any third-party drivers.Drivers may also be available for free directly from manufacturers' websites. Microsoft and Windows are either registered trademarks or trademarks of Microsoft Corporation in the United States and/or other countries. Any other third-party products, brands or trademarks listed above are the sole property of their respective owner. No affiliation or endorsement is intended or implied.